The BCCM/GeneCorner Plasmid Collection accepts plasmids from and distributes plasmids to researchers worldwide. Funding by the Belgian Science Policy (Belspo) allowed BCCM/GeneCorner to evolve into a unique plasmid repository in Europe.

BCCM/GeneCorner is embedded in the Department of Biomedical Molecular Biology (DBMB, Ghent University) and the VIB-UGent Center for Inflammation Research (IRC, VIB), which together form the host laboratory for BCCM/GeneCorner.

The BCCM/GeneCorner activities are continuously supported by the research activities of its host laboratory, which focus on molecular and cellular mechanisms that are at the origin of chronic inflammation, autoimmune diseases, infectious diseases and cancer. These mechanisms are mainly studied in cellular and animal model systems by using the most advanced methods of molecular biology, cell biology and immunology. Expression plasmids for human and mouse genes are frequently generated and extensively used, offering an ideal environment for BCCM/GeneCorner. Research of the host laboratory is multidisciplinary with molecular biologists, immunologists, cell biologists, and bioinformaticians collaborating with clinicians. It is the ambition of the host laboratory to translate basic research into innovative ways for diagnosis and therapy of human diseases.

BCCM/GeneCorner has already performed a number of research projects to improve plasmid DNA storage and to enlarge its scope of basic vectors and genes in view of the needs of the academic and industrial communities, and is continuously interested in project-based scientific collaborations on these issues.

Scope of the biological material

The focus is on the collection of recombinant plasmids that can replicate in a microbial host strain, with main interest for:

BCCM/GeneCorner also accepts natural and genetically modified animal or human cell lines, including hybridomas, as well as other genetic material, in the safe deposit and patent deposit collections.

BCCM/GeneCorner is ISO 9001:2015 certified for accession, control, preservation, storage and supply of biological material and related information in the frame of public deposits, safe deposits and patent deposits.

Bee nutrition depends on pollen as source of protein and other nutrients. Bees process and store pollen that then ferments by the action of lactic acid bacteria and yeasts, preventing it from going mouldy. The resulting bee bread is marked by a changed amino acid profile and a lowered pH.

165 samples and 252 identified yeast isolates showed that the initially high yeast abundance, dominated by Starmerella, decreased rapidly during bee bread storage towards a low density of Zygosaccharomyces. Starmerella (Candida) apis, a rarely isolated species, was the most frequent and abundant species in fresh bee bread. Yeasts from the bee’s honey stomach and from pollen pellets were dominated by Metschnikowia.

Our study and the representative strains MUCL 56082 to MUCL 56139 & MUCL 56143 should promote research on the ecological role of microbiota in bee collected pollen.

The apparent specialisation of different yeast genera, each in different phases of bee bread maturation or in its components, indicates a non-random distribution. More work is needed to clarify the source, potential role, and possible geographical and seasonal incidence of the yeast species that are associated with fresh bee bread to better understand honey bee nutrition. Our study suggests yeasts of the genus Starmerella as a study object for such work.

In February 2018, a large transposon insertion mutant library of the Mycobacterium bovis BCG (Bacille Calmette Guerin) Pasteur 1721 vaccine strain (Master et al, 2008) has been transferred from VIB-UGent to the BCCM/ITM Mycobacteria Collection situated at the Institute of Tropical Medicine in Antwerp.

The transposon used to construct this >8000 clones library (96x96-wells) is derived from the mariner element Himar1 which is shown to efficiently transpose in bacteria (Rubin et al 1999).

Transposon mutagenesis followed by transposon deep sequencing has proven to be a useful tool in gene-essentiality studies in M. tuberculosis. For the construction of this unique Tn mutant library, the lab of Prof. Dr. Nico Callewaert (VIB Medical Biotechnology Center, UGent) optimized the Illumina library preparation protocol and also implemented an additional Cartesian pooling step. The combined approach of Cartesian Pooling – Coordinate Sequencing (CP-CSeq) reports both on the identity as well as on the physical location of sequence-tagged mutants in the well-plate clone collection.

By implementing the combined CP-CSeq method, an almost comprehensive set of genome-wide mutant strains is created in less than the time required to generate even a single mutant with classical techniques.

With M. bovis BCG being 99% genetically identical to M. tuberculosis, it is a highly suitable and safer alternative for genetic studies. Moreover, although generated almost a century ago, M. bovis BCG is still the only licensed vaccine against tuberculosis.

Although an injection with BCG offers good protection in infants, it is not very effective for adults. Therefore the need for a new and better vaccine against TB grows stronger every day.

The generation of this Tn mutant library can thus be of great value for the tuberculosis research community as these transposon mutants can be directly used for hypothesis testing and validation studies, both in vaccine research and in drug development programs.

One of the mutants from the collection with a disruption in the SapM locus (sapM::Tn) has already been shown to be a better vaccine candidate against M. tuberculosis than the parental M. bovis BCG strain in mice (Festjens et al, 2011). Nevertheless, further improvements through additional mutations will probably be required to progress into clinical trials.

More recently, the lab of Prof. Dr. Nico Callewaert has transferred a second transposon insertion library, derived from the M. bovis BCG Danish 1331 strain (first WHO reference strain, NIBSC 07/270), to BCCM/ITM (Borgers et al., 2019). This new ‘Danish’ library is twice as big as the first ‘Pasteur’ library (2x96x96 wells, 15,320 traceable mutants) and targets 83% of all non-essential M. tb homologues. Moreover, it was made with a derivative of the optimized Himar1 transposon (incorporating a SacB gene and FRT- and ISceI-sites flanking the antibiotic resistance cassette) to afterwards allow the creation of unmarked transposon mutants (Borgers et al., 2020).

In case you place an order, BCCM/ITM will send out the solid agar plates containing the grown colonies. A comprehensive protocol will be provided explaining how to obtain clonally pure mutants from hereon.

Remark: the clonal purification step is crucial, as many of the stocks in the library are not completely clonally pure; probably due to the in-bulk creation of the library and the significant clumping behavior of BCG. 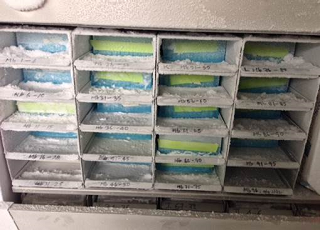