BCCM/IHEM, in collaboration with the Faculty of Veterinary Medicine of the University of Ghent, investigated the fungal diversity associated with bat populations in Northern Belgium (Flanders). The goal of this study was first to detect the presence of fungal pathogens like Pseudogymnoascus destructans, the causative agent of white-nose syndrome, or dermatophytes that can cause skin lesions. It aimed also at evaluating the mycological diversity on bats and the role played by these animals in the dispersal of fungi.

With the help of the Bats Working Group of Natuurpunt, a Flemish nature conservation organization, about 110 bat individuals belonging to 7 different species were sampled in several localities across Flanders. Swabs were taken on various areas of their body surface and put in culture using different media and temperatures. 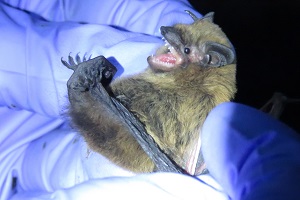 The analyses revealed very heterogeneous fungal communities with 209 different taxa out of the 418 isolates obtained. The number of fungal taxa per bat reached up to 12 in some specimens, with significant differences between sampling sites, suggesting that bats could be indicators of the fungal diversity of their environment. Many species appeared to be cosmopolitan or plant-associated fungi, such as Cladosporium spp., Penicillium spp., Aspergillus spp. or Alternaria spp. Moreover, some species that were previously known from a single strain or believed to be restricted to a particular environment were isolated, including Blastobotrys arbuscula, Arthroderma onychocola and Absidia stercoraria. Interestingly, a strain belonging to Apiotrichum otae, a species originally described from bat guano in Japan, was obtained.

Hibernacula were also sampled during the winter season but the presence of P. destructans was not detected.

A large part of the isolates obtained in the frame of this project have been deposited at BCCM/IHEM, with more than 300 new publicly available strains that enriched the collection.