Accurate species-level identification of numerous isolates obtained in the frame of biodiversity studies often involves a first “dereplication” step in which all isolates are examined to group those that represent the same taxon. Dereplication is thus the assessment of taxonomic novelty and aims to reduce a (large) number of isolates to a smaller non-redundant set representing the total microbial diversity of the sample. Matrix-Assisted Laser Desorption/Ionization Time-Of-Flight Mass Spectrometry (MALDI-TOF MS) has been introduced as a rapid, high-throughput and low-cost tool for dereplication and characterization of microbiota in bacterial diversity studies. MALDI-TOF MS is a soft ionization technique allowing desorption and ionization of biomolecules, such as proteins and peptides (mainly of ribosomal origin), in a non-destructive manner and couples high sensitivity with accuracy. The generated ions provide a peptide fingerprint, i.e. mass spectrum, that can be used to characterize and further group isolates at species and even infraspecific levels. 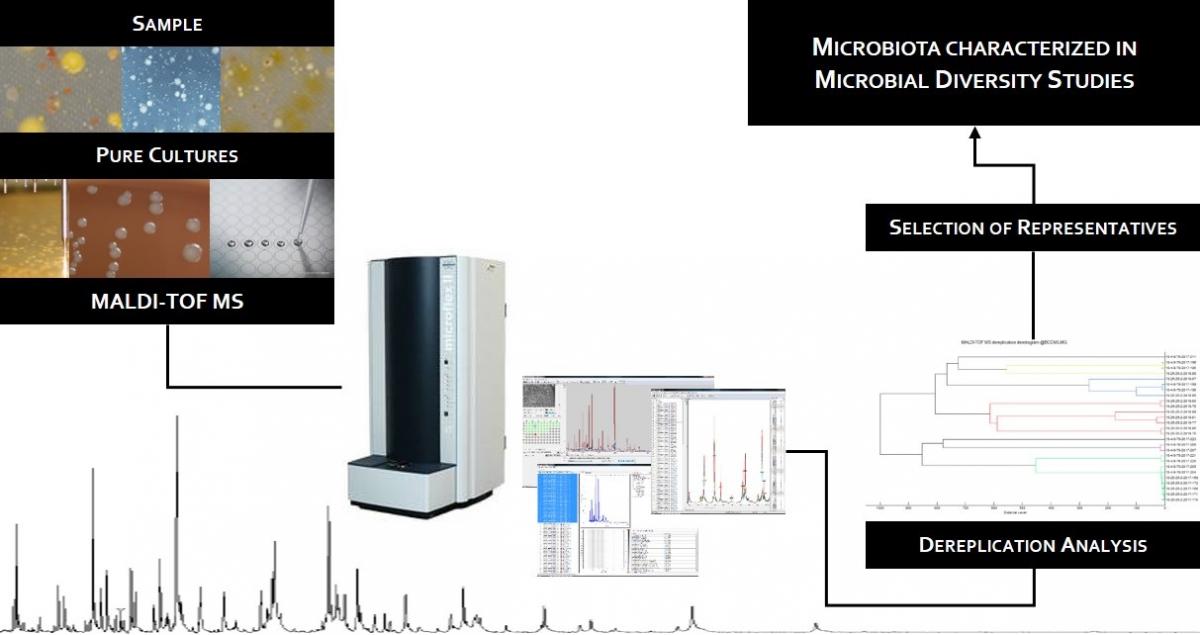 BCCM/LMG offers microbial diversity studies to clients as small-scale (e.g., the search for particular species/strains) and as large-scale diversity studies (complete screening, culturomics) starting from different -even complex- matrices (e.g., medical, environmental and food-related). In consultation with the client different cultivation approaches (e.g., growth medium, temperature and oxygen rate) are selected to enable the growth of a diverse set of microbiota from the sample(s) provided. After incubation, colonies are randomly picked, purified and subsequently analyzed via MALDI-TOF MS. As such, MALDI-TOF MS enables a high-throughput rapid and affordable selection of representative isolates per sample, the so called “dereplication”. Simultaneously, accurate species-level identifications can be performed for each isolate.

The service report provided to our customers includes a detailed description of the techniques used, an overview of the isolates obtained per sample and per cultivation condition, an extract of the cluster-analysis performed on all isolates, the confidence score obtained with the most related species present in the mass spectral identification database and a scientific conclusion on the identity of the cluster representative(s) selected.